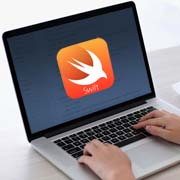 Apple's newly announced programming language brings a number of benefits and major change in how developers can build apps for the iPhone and iPad. Before now, Apple has been relying on Objective-C, which was built on the foundation of the venerable C programming language, but with Swift, Apple has decided to leave the past behind in favor of a more modern, and developer-friendly coding language.

iOS's new programming language, Swift, is used to develop apps for mobile devices but today developers want to take this programming language to another level. Their focus is on using the language to support large computer data centers that drive our mobile apps and websites across the Internet. A new version of Swift, named Perfect, has been released that runs not only on the iPhone and other personal devices, but also on computer servers that deliver data and services to these devices.

The idea is that coders can now use Swift to build both a mobile app and the server code that drives the app. For anyone building an app, it is in the best interests to use one language and the same code, at the front end and at the back end. This version of Swift currently runs only on Apple's Mac OS X operating system, and although OS X is occasionally used on servers, this is far from the norm since most servers still run on Windows or Linux.

With Apple now releasing the open source version of Swift, it has freely shared the underpinnings of the language with the world at large. Now any developer around the world can port the language onto other operating systems, including Linux, which dominates the modern data center.

Using Perfect, Swift has been augmented with some extra tools which are needed to deploy and run Swift on the server. The coding world is moving in such a way that soon Swift will end up as a server-side language. More and more coders are using the same language on the server side as they use on the client end. For instance, Node.js lets you build server software in JavaScript, the language originally designed for building applications inside web browsers. Java, not to be confused with JavaScript, is the primary means of building apps on Android phones, and it has today risen to new importance in data centers.

The Future of App Development is Swift

The future aim of the Swift programming language focuses on stability and cross-platform consistency, and further includes:

So where does all this leave app developers? The answer came with a statement from Tim Cook when he referred to Swift as the "the next big programming language", using which developers will be building apps for "the next 20 years".

Flatworld Solutions has been in the iOS app development domain for almost a decade now. We have been providing high-quality mobile solutions and excellent mobile app development solutions to clients around the globe. Our iOS app developers have the required experience and are extremely skilled at catering to you exact business needs.

Whether your app needs video compression, push notification support, cloud support, or your needs to integrate the latest IoT technology, our developers have the capability to deliver every demand at extremely cost-effective prices.

If you have any kind of app development requirement using Apple's Swift programming language, feel free to get in touch with us and we will be more than happy to help you out.