Best Messaging Apps That You Should Give a Try 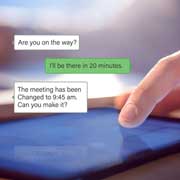 The advent of smartphones and easy access to an internet connection has allowed the boom of new texting and messaging technologies. It has been almost two decades since the first text message was sent and ever since then, texting has played an important role in bringing people together. Being the most widely used means of communication, text message app companies have developed newer apps to make the entire texting experience easier.

It is known that almost 80% of the mobile phone owners use their smartphones for the purpose of text messaging. It is seen that the younger generation are the most active testers as compared to other age groups. App development companies are coming out with newer text messaging app ideas and in this cut-throat competitive market it becomes necessary to stay updated with the latest trends and technologies. In this article we have listed the best texting apps that one needs to try out.

10 Best Messaging Apps That You Should Try

In today's mobile app industry, every other day thousands of apps are uploaded to the app stores. In this fast moving and competitive market it is important that the app stands out and makes an impact on the users. There are tons of messaging apps available today but to make your life simpler here we have listed the best popular mobile messaging apps and some of the best apps for texting that you should try out -

Flatworld Solutions has been providing top quality and flawless mobile app development services to clients around the world. We specialize in developing mobile apps for different platforms such as Android, iOS, Windows, etc. Our cost effective services help you save considerable amount of time and money as compared to hiring an in-house team of mobile app developers.

If you have any kind mobile app development requirement, feel free to get in touch with us and we will be more than happy to help you out.