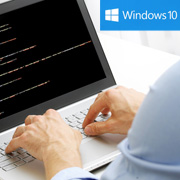 By creating an app for Windows 10, one has the opportunity to reach millions of users across the globe irrespective of the type of device used, since Windows 10 supports phones, desktops, tablets, etc. This is largely due to the fact that the Windows 10 app development environment delivers compatibility to your apps across Windows 10 devices with a common API along with tools and options to tailor your app to each device's unique experience.

Features of the Windows 10 Development Environment

The features in the Windows 10 Development environment are pretty new and less well-known as compared to their traditional counterparts. But some of them are pretty useful and are gaining popularity amongst developers for their ease of use. Some of them are:

Windows app development is increasingly gaining importance amongst the mobile app development community. In the quest for providing the best mobile apps and user experience, developers are constantly looking out for newer tools and trying to keep themselves updated with the latest tools and technologies available in the market.

Some of the latest tools used by developers these days for effective Windows 10 mobile development include:

Get your Windows 10 Mobile App Developed by Us Today

Flatworld Solutions has been providing flawless Windows 10 mobile app development services to clients around the world at very competitive prices. These services are handled by a team who have ample amount of experience and who are able to understand the intricacies of the environment. Our highly experienced team is skilled to deal with critical scenarios and develop futuristic apps for the Universal Windows Platform which works across mobiles, tablets, and desktops.

If you are looking for a Windows 10 app developing partner, feel free to share your app idea with us and we will get back to you within 24 hours.