Power Your Apps with MEAN, the Future of Programming 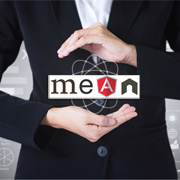 The MEAN stack is a full stack JavaScript solution that is enabling developers to build robust, fast, and easy-to-maintain web apps. Even though a nascent web development technology, MEAN development is now a popular option for creating beautiful, dynamic websites, and is powering everything from front-end frameworks to back-end servers and database environments.

As a developer, you might want to use the MEAN stack for your next project, and this article will show you why doing so could be a really good choice!

The common denominator for all technologies which are part of the MEAN stack is the JavaScript language. MEAN, which is an acronym for MongoDB, Express, AngularJS, and Node.JS, can support notable feature sets including event-driven architecture, prototypal object orientation, closures, etc. across the board.

The reason why application development in MEAN is so popular with the developers is because it needs knowledge of only a single language - JavaScript, to develop feature-rich applications. This is much different than, say, working with Ruby, Python, or Java on a server level, and then using JavaScript in the browser. To top that, a JavaScript-based Web API makes it easier to switch between server and the client codes.

MongoDB: A superb NoSQL database, MongoDB has risen in popularity with companies who use large volume data sets. MongoDB also works well with Rails apps and is the default database for the Meteor.JS project. It is growing much faster than any other NoSQL or SQL database, such as Cassandra, CouchBase, MySQL, SQLite, etc.

Express: Express.JS is a node application framework, and makes it very easy for developers to create an MVC application on the server side.
Not only can you create routes and templates with ease, but support multiple template languages such as Jade.

Angular JS: More of a framework to create SPAs than a typical language when it comes to web development, Angular.JS is extremely important and has seen a lot of money being poured into it by Google and YouTube over the years. It is growing much faster than EmberJS and Backbone.JS.

Node JS: Although it runs on Linux, Node.JS is actually a server based on the Google V8 engine. A lot of developers swear by its non-blocking I / O which allows it to deliver millions of requests with ease. LinkedIn, after turning to Node.JS for their mobile app, were able to reduce server count by almost 90%, while delivering 20% faster results.

Not only large organizations, but coding boot camps and even online course platforms are switching to JavaScript as their language of instruction and communication. Therefore, it makes sense that as a developer, you learn JavaScript in its entirety before learning Ruby, PHP, Python, etc. Some of the key reasons why you should use the MEAN stack to power your next application include -

Flatworld Solutions - Stacking Up the Power of Mean for Your Benefit

For the past 14 years, we at Flatworld Solutions (FWS) have been delivering high-quality web development services of myriad complexities to our global clients. We provide consistent MEAN development services that ensure immense scalability without affecting your bottom line.

Our developers embrace the command line and are pros when it comes to in-depth JavaScript knowledge, and we take pride in using emerging as well as established technologies such as Ruby on Rails and PHP, amongst others.