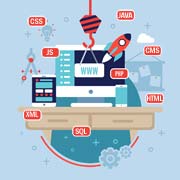 The mobile app industry is an exciting area to keep an eye on. It has grown immensely over the last decade and it is likely to do so in the future as well, at an even faster rate, due to some of the latest mobile app development tools and technologies making their foray into the industry today.

The future of mobile app development will see more developers building specialized tools for other budding developers. The market of mobile app development tools is already showing signs of increased growth. Powerful tools, especially cross-platform tools that make it easier for developers to build mobile apps, are well on the rise. There are third-party tools for almost every step of a mobile developer's workflow, from cloud servers to app analytics. In this article, we will look at some of the more popular tools available at a developers disposal today.

There are many advantages of outsourcing mobile app development, especially when you do not have access to the necessary resources, nor the expertise to develop a high-quality app. Some of the advantages include -

At Flatworld Solutions, we develop mobile apps with high-quality user interface and superlative user experience. Our team of highly qualified mobile app developers has enough experience to develop apps on different platforms such as Android, iOS, Windows, etc. We have been providing mobile app development services for over a decade now to clients around the globe at very cost-effective prices.

If you wish to leverage the latest tools and mobile application technologies and develop high-quality apps, then feel free to get in touch with us and we will get back to you within 24 hours.