Top 10 Software Testing Trends to Watch Out For in 2018 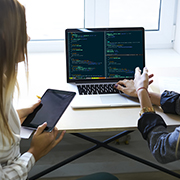 The technological world is moving forward at a dizzying pace. There is an immense and persistent pressure on the development team to deliver faster solutions without any compromise on product quality. Software quality has become a competitive differentiator for top businesses. This has brought software testing to the forefront of development. Testing used to be the last step of product development, but if we look at the current trends in software testing, we will see that now it plays an important role at every stage of the development process.

In the world of agile applications, the role of testing and quality assurance (QA) has changed drastically. According to a recent research report, one-quarter of the total IT budget would be dedicated to Testing and QA in 2018, but with the massive digital transformation and the growth of the Internet of Things, it is estimated that this proportion would rise to 32% by the year 2020. As the software market grows, the demand for testing is keeping pace as well. Let us discuss some of the latest trends in software testing.

Software Testing Predictions for 2018 & Beyond

Software testing was considered to be the least important steps of software development but not anymore. Software testing is gaining tremendous importance in the industry as the demand for high-quality software solutions is sky-rocketing. Some of the key software testing trends for 2018 and beyond are listed here -

If you are looking for reliable, accurate, effective, and cost-effective software testing service provider, then you have come to the right place. Get in touch with us today!