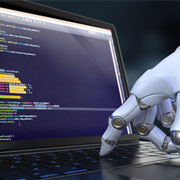 Automated functional testing tools drive the user interface, mimic the actions carried out by a human, and then check for the expected results. This type of testing is becoming increasingly important for numerous software projects to test for regressions, automatically verify all the key functionalities, and help software teams to simultaneously carry out several tests within a short span of time.

Why Opt for Automated Testing?

Manual software testing has been around for a very long time. However, automation testing has taken the industry by storm. Here are some of the major benefits of automated testing as compared to manual testing -

Get in touch with us today!