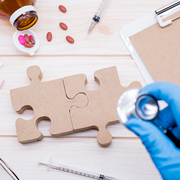 International Classification of Diseases (ICD) and Diagnostic and Statistical Manual of Mental Disorders DSM are systems that identify and classify diseases once the diagnosis is established. ICD and DSM are identical in some ways and differ in others. However, both systems represent codes and manual for diseases which provide medical informatics such as automated decision support, claims process in medical billing, statistics on morbidity & mortality, surveying epidemic outbreak, etc. as well as for clinical purposes such as treatment, and welfare of public health.

This write-up will focus on the differences and similarities between ICD and DSM systems. The classifications of illness under ICD includes the ones under. However, the inverse cannot hold true because DSM classification is exclusively limited to psychological disorders. Neither of the two is considered biologically plausible and final. But it is just a matter of preference for classifying health condition. Read ahead to know in detail, the specifics of ICD vs DSM. But before that, here is an introduction and comparison of ICD and DSM systems -

In the world of medical coding, diagnosis classification, and areas where better healthcare decision is critical, it is important to have a generally accepted codebook that can make the process easier and more usable on a global scale. The answer to that is ICD and DSM classifications.

They are manuals used by healthcare and insurance professionals for treatment and reimbursement process. But, why do we need two sets of classification systems? Ahead lies the answer to similarities and differences between ICD and DSM.

Similarities between ICD and DSM

A few similarities between ICD and DSM Systems are as follows -

Differences between ICD and DSM

Although the coding system looks identical, it does have areas where the system differs. Here are the main differences between ICD and DSM systems -

Although it promptly assists in data collection, It is considered to be less accurate

With clinical significance criteria and specificity in the description, it is considered to be far more accurate

Reliability
ICD
ICD systems are considered to be less reliable because they reject diagnostic criteria without independent validation. This leads to disagreements in diagnosis
DSM
As operational criteria were introduced, the system is considered more reliable in a statistical context
Credence
ICD
It is an official classification adopted by many nations around the world
DSM
It is an official classification in the United States. But is adopted by many countries as well
Purpose
ICD
ICD is used for classifying all illness and is used by many health practitioners
DSM
DSM is used particularly by psychiatrists as it represents code set for all mental disorders
Applicability
ICD
ICD is popular in WHO member nations which include low and middle-income nations
DSM
DSM is the first choice for psychiatric health in high-income nations
Coverage
ICD
ICD provides guidance and diagnostic criteria without including operational criteria
DSM
DSM provides operational criteria which distinct definitions for each condition

Both ICD and DSM code sets bear the value in the future of healthcare. The popularity of the DSM has drawn the attention of researchers and is currently driving awareness of advantages and limitations of each system. While DSM stimulated research, its advances were truncated when this system provided credibility to non-existent diagnosis.

On the other hand, ICD could not generate buzz at equivalent proportion because it was insufficiently resourced. Over the last decade, vast improvements have led to better definitions that are being considered by health experts worldwide. The ICD and DSM systems will continue to see more code inclusions ahead as well as support in improving the global healthcare.

Flatworld Solutions is a brand which is conscious of the healthcare market and the demands within. Ours is a 13-year-old ISO-certified company with expertise in medical billing and coding services. We carry out healthcare BPO projects from our secure global offices where your data is handled from a secure infrastructure. Our teams of medical coders with decades of experience are adept at coding protocols and standards followed by the industry. FWS is a top choice for clients worldwide because we offer services which are cost-effective and highly accurate. Outsource your project to us and avail completed results at short turnaround time. We also offer round the clock assistance and a dedicated project manager for single window engagement.

Contact Us to outsource your medical coding requirements. Our team will follow-up with a customized quote within 24 hours.

Have specific requirements? Email us at: healthcare.info@flatworldsolutions.com