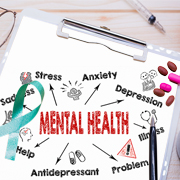 Diagnostic and Statistical Manual of Mental Disorder (DSM) & International Classification of Diseases are repositories of classification codes in an alphanumeric format that is useful for correctly identifying diseases and other disorders. This HIPAA-approved system of classification is used by healthcare professionals, physiatrists, researchers, clinicians, and nurses to efficiently store, retrieve, and share diagnostic information.

However, the disease classification handbook from ICD and DSM does not include information on treatment of any disorders or diseases. DSM was first published in 1952 while development on ICD began as early as 1893. The DSM is strictly confined to mental disorders while the ICD system is considered a global classification. Both the system is subject to expansion every 10 years. Therefore, DSM V and ICD 11 are the newest classifications to streamline diagnosis of illness.

What are DSM and ICD?

DSM and ICD are standardized criteria for classifying diseases. ICD is a classification approved by WHO for its member nations, while DSM is finalized by American Psychiatry Association (APA). The DSM is exclusive to psychiatric conditions, but ICD consists of codes for all illness and conditions. DSM is called a statistical manual because its antecedents were relied upon for collection of mortality data from hospitals. Here is a listicle of facts that broadly distinguishes DSM and ICD classifications -

The Concept of ICD 10

World Health Organization (WHO) is the governing body behind the ICD codes. The code classifications are periodically updated to help the global healthcare industry to have a common language in understanding illness. The 10th revision of ICD came into effect on October 2015 after facing an extensive delay in its implementation. The WHO planned to release minor updates annually while major ones are slated to be rolled out once in three years.

Purpose of ICD-10 and Its Usage

155,000 ICD-10 codes are widely used by healthcare industry professionals, coders, insurance companies, and other agencies to keep track of diseases and to speed up reimbursement. ICD-10 provides an accurate mapping from a multilingual classification of clinical terminology called SNOMED CT. The mapping from SNOMED CT to ICD-10 can facilitate computerized coding which is fast and accurate. The procedure codes in ICD-10 provides a detailed information of the procedure performed by a healthcare provider along with the medical device used in the procedure. Countries like New Zealand, Australia, and Canada uses a customized version of the ICD-10 that is adapted to their healthcare system.

A newer version of ICD called ICD-11 was planned for endorsement in 2017, however, the presentation at the World Health Assembly (WHA) was rescheduled to May 2019. In June 2018, a preview of ICD-11 was released for adoption by WHO's member states. It is expected for the latest classification, which is a user-friendly and electronic format to come into effect by January 2022. This new classification is a quantum leap over ICD-10 because it covers the latest developments in medicine and includes an updated understanding of recent illnesses.

When Can DSM-5 Be Used for Insurance Purposes?

DSM-5 meshes perfectly with ICD-9-CM. Since the latter is a HIPAA compliant coding system it is used by insurance companies. However, some delay can occur while updating claims form because of the format change in DSM IV-TR as well as the slightly different reporting procedure to facilitate the changes in DSM V.

What is the Importance of ICD-10?

How do you benchmark the safety, efficiency, and quality of healthcare service? The answer is ICD-10 code set. It is a code repository that provides a detailed information for reimbursement, gauging the clinical outcome, claims processing, payment capture, and disease management. If you wish to do away with the risk of claims rejection, fraudulent claims, and non-payment then ICD-10 is the way to go. ICD-10 was recognized as a handy tool for entities that are covered and not covered by HIPAA regulations. The broadened understanding could streamline worker compensation and injury classification for benefit coordination.

What is the Importance of DSM?

DSM, currently in its 5th edition, is considered as a comprehensive handbook with the latest description, symptoms, and other information to help clinicians to classify and interpret psychological disorders. The current version is accorded by practitioners, healthcare experts, researchers, and other key professionals on the latest understanding of psychological disorders. It provides a common language and it is consistent throughout the manual. This would enable researchers and physicians to collaborate and discuss patient cases for accurate diagnosis. Future revisions (if any) can be made effortlessly by harnessing the database of treatment and diagnosis insights.

The transition to ICD-10 from ICD-9 wasn't an easy one. The move faced stiff opposition from lobbyists, politicians, et al. Leading the opposition were physicians along with American Medical Association who feared that they would lose backing from other critical areas in order to make up for the cost-intensive process of ICD-10 implementation.

Being a reliable source of clinical documentation for record future diagnosis and completion of insurance formalities, there are similarities and differences of ICD-11 and DSM V.

Similarities between ICD -11 and DSM V

ICD and DSM Systems are similar in the following areas -

Differences between ICD-11 and DSM V

Despite having commonalities in many aspects, the ICD and DSM code sets differ in many ways. The difference between ICD and DSM are as follows -

Reliability
ICD
In ICD classification the diagnostic criteria are not based on independent validation. Hence, it slightly lags slightly behind the DSM code set
DSM
With the introduction of operational criteria, it is considered by healthcare professionals as the most accurate classification
Credence
ICD
ICD is used by member nations of WHO and it is widely used because of its advantages in diagnoses
DSM
DSM classification is used by healthcare providers in the USA. Due to its practicality, it is adopted by psychologists of many other countries for research
Coverage
ICD
ICD code classification covers a wide range of illnesses including mental health disorders
DSM
DSM is a statistical manual with code modifications that cover only the phycological conditions and illnesses
Applicability
ICD
WHO's member nations across low to middle-income bracket are beneficiaries of this code system
DSM
DSM code system is adopted by countries that fall under a high-income category

In the view of active developments in the field of healthcare, a greater need is ever-present to update the system so that the diagnoses and treatment approach can be accelerated and streamlined to the present standards. WHO is gearing up to introduce ICD-11 in 2022 ergo, but all eyes are set on May 2019 because ICD-11 classification will be presented at World Health Assembly after being deferred multiple times.

This new classification is believed to be medically focussed and capable of speeding up the evaluation process along with claims management. However, there are a few who firmly stand by the opinion that ICD-11 could face a string of challenge and delays before efficient adaptation because it took a decade for ICD-10 to develop clinical modifications.

Flatworld Solutions is an ISO 9001: 2015 certified company with 19 years of experience in healthcare BPO solutions. We take ISO/IEC 27001:2013 certified security measures to ensure the confidentiality of the project and your client's clinical data. We handle an array of healthcare medical, coding, translation, and transcription projects with care and precision.

We exploit the latest developments in coding classifications to speed up diagnosis, patient care, and insurance process. Our cost-effective services also come with quality support on a 24x7x365 basis. We have highly skilled coding and billing specialists who are adept at HIPAA compliant process and coding classifications. The services we provide include medical transcription, medical billing & coding, healthcare claims adjudication, and more.

Contact Us to outsource your medical coding requirements. Our team will follow-up with a customized quote within 24 hours.

TESTIMONIALS
Get a FREE QUOTE