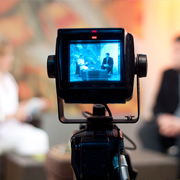 We've come a long way from watching video on VCDs and DVDs to Blu-rays and digital video streaming (such as Netflix.) This progress in digital streaming comes from development in video production and ingestion technology.

Businesses are now using video marketing techniques for better online presence. As per a recent survey, including a video on a landing page can increase the conversion by 80% and including it in an email leads to 200-300% increase in click-through rate. 64% of users buy a product online after watching the video. As per reports by YouTube, mobile video consumption rises by 100% every year, which is why it is important for video makers to stay in-tune with the most recent trends in video production.

Read further to learn more about the top trends in video production technology.

5 Video Production Trends for 2018 and Beyond

This year has seen some of the most innovative trends in video production. Let's take a moment to talk about the top 5 developments in video technology.

Other Rising Trends in Video Production

Outsource to Flatworld Solutions for All Your Video Editing Needs

Flatworld Solutions has been in the business for over 19 years and specializes in providing superior video editing services. Whether you need your YouTube video edited or require editing for your GoPro's recorded footage, our team of dedicated video editors will cater to all your video editing needs.

Please feel free to leave your comments in the section below. Our friendly staff will get back to you as soon as possible.