Top 10 Video Editing Trends That Ruled the Roost In 2017 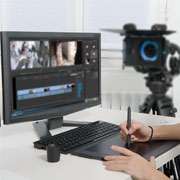 The field of video editing has come a long way in the past few years. What earlier was a domain of creative professionals with extensive know-how in the cutting-edge software is now crowded with YouTube stars and home video professionals who can create engaging and incisive video content while using relatively simple tools.

At the same time, the future of video editing still lies in the hands of professional film and video editors who are leveraging state-of-the-art technology to push the realms of what is possible. Today, video editing trends and their applications are benefiting multiple industries such as film, broadcasting, advertising, marketing, etc. Let us have a look at some of the latest video editing trends and how they are changing the landscape of creative video production and editing.

The 10 Most Sought-after Video Editing Trends in 2017

At FWS, we believe that video editing isn't just something for Hollywood but can serve a valuable role in the marketing and advertising departments of different industry verticals. With an experience of over 19 years in high-quality video editing, and with access to the latest state-of-the-art video editing workstations and software, we can provide you with an outsourcing experience like none other.

Contact us right away to learn how our video editing services can help you achieve maximum benefits.