Storyboarding Tips for Your Short Films 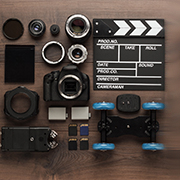 For inventive storytellers on a shoestring budget, short films have been a medium of choice for decades. Not only do short films tap the unlimited potential of visual storytelling, but also leverage the power of the digital revolution and the popularity of mass media channels such as YouTube, Vimeo, etc.

Making a short film could be divided into three main stages -

Whether you are a novice or an experienced filmmaker, a short film could serve as an incredible training ground for you to train your creative flair, and create a feature film which can be monetized, seen, and even sold. Therefore, it is especially useful that you employ storyboards during the pre-production stage of your film shoot for better overall results.

Why Use Storyboarding Tips and Techniques?

Simply put, storyboards are hand-drawn illustrations which are ideally used to show shot locations, camera placement, and feature composition. The history of storyboards predates to the 1930s, when Webb Smith, a Walt Disney animator drew scenes and pinned them up in sequence for his crew to see. But even with advancements in filmmaking technology over the years, the first complete storyboard was created to pre-plan a Disney short film - Three Little Pigs, only in the year 1993!

Now, most Hollywood producers have a separate team of artists working on film storyboards much before production starts, but for an indie-filmmaker, storyboarding still poses a daunting challenge which must be faced alone.

Storyboarding can not only help you plan out scenes and camera placements, but also allow you to experiment with changing sequences so that you can visualize the final edit of your film. This, in turn, can help you save a lot of time, and more importantly, for those on a minuscule budget, it means greater cost savings as well.

8 Storyboarding Tips for Your Short Films

Although it requires time and effort, still Storyboarding is now being used during the pre-production stages for AAA Hollywood titles, video games, TV shows and even commercials. The following short filmmaking tips will help you get started and get going on the road to creating efficient storyboards -

Hope these storyboarding tips were helpful. With over 19 years of experience in working with major Hollywood studios, as well as partnering with some of the top advertisement firms in the world, our movie storyboarding services are ideal if you are looking for detailed storyboards or animatics at cost-effective rates.