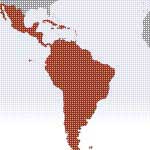 As the global market for offshoring services continues to expand, several new emerging destinations are now competing with the more mature Asian offshore destinations. Latin America outsourcing is an emerging trend and the region has emerged as one with great promise for the global services industry, primarily due to the growing US demand for nearshore services.

Juan Diaz, Consulting Manager, Wipro Consulting Services and author of the recent report (by Wipro Consulting Services) titled "Latin America-A New World Option for Offshoring" says, "When clients look at Latin America they look for Spanish language skills, geographical proximity, and also cost effectiveness. For example, if you look at India which is the most developed sector in outsourcing or shared services, there is a lot of wage inflation going on, and inflation is on the rise every year. In that comparison, Latin America is more stable. If you look at long term in that case, it is going to be probably same cost for some years and these are the kind of things companies are looking at. So, probably if you have the same cost, if you have the same talent and it takes you the same to go from Europe to India or from Europe to go to Latin America, then Latin America is also a good option."

Mary Korthuis, Vice President and Operations Lead, Mexico and Guatemala, Genpact, has this to say about Juarez, Mexico and Guatemala-their new locations for BPO's in Latin America. , "Drug cartel-related violence and related media stories has caused concern with some customers and their own security organizations have limited/eliminated their travel to Juarez. Other customers are fine and continue to travel in and out with no concern."

Don Berryman, General Manager of Americas at Sitel has this to say about the Latin American outsourcing industry, "You must remember this is not a domestic US location. There are many cultural and sociological similarities but they still don't have the infrastructure of the typical U.S. location. So customers will not have the same experience they would with a US call center. Expectations have to be aligned to the uniqueness of the environment, similar to when we developed our presence in the Philippines or India."

Diaz's report also elaborates on Wipro's ranking methodology that can be used to help organizations decide on the best outsourcing destination in Latin America. The ranking method was based on three primary business criteria, namely talent and resource availability, cost effectiveness and business catalyst. On a scale of 1 to 5 Colombia ranked 3.34, Brazil 3.08, Chile 2.98, Argentina 2.91 and Mexico 2.70.

Diaz shares on what he feels are the best outsourcing destinations in Latin America. He says. "If we take an overall assessment where you just mix what you have in terms of talent, what you have in terms of cost, infrastructure, countries that have been stable... if you take all that and mix it then I'll say Colombia and Brazil are best option. Brazil is the best option because it is where the biggest market is and most developed next to Mexico in the region. And Colombia is number one as it is the cheapest and most business friendly and it is here where all the big players are actually going because there is huge potential there."

With established regional markets and promises of lower costs, Latin America continues to be the fastest growing destination for offshore services.

The Pros and Cons of Outsourcing

While mostly positive results arise from outsourcing, be aware of a few possibly negative consequences.

Useful tips for outsourcers concerned about data security and confidentiality.

The Pros and Cons of Outsourcing

While mostly positive results arise from outsourcing, be aware of a few possibly negative consequences.

Useful tips for outsourcers concerned about data security and confidentiality.

Useful information to help business travelers navigate the process of obtaining a business visa to India.

Types of offshore analytics and future prospects for this domain.